2022 World Cup qualifiers: There is equal battle in our group, says Armenia manager 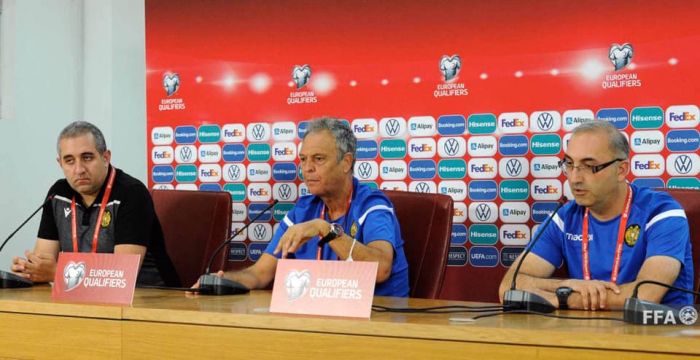 The Spanish manager of the Armenian national football team, Joaquin Caparros, answered reporters' questions at a press conference after the fourth round of Armenia’s Group J match against North Macedonia in the European qualifiers for the 2022 World Cup. The match, which was played in the North Macedonian capital of Skopje, ended in a goalless draw.

"There was everything in this game. We started the first half by moving back, as the opponent could have caused a big headache on the wings. But in the process, the boys started to work more confidently and started to counterattack. They could also have scored a goal.

We would like to have attacked constantly, but the opponent forced [us] to move back. The whole problem is to determine what to do in each instant, and our boys were able to react correctly to the situation.

There is an equal battle in this group. At this moment, there is no need to pay attention to the state of the tournament, and there is a need to focus on every next game.

I am happy with the team’s game. The boys proved that they can fight.

I trust the young [players of ours]. They must be allowed to make mistakes; it is the only way for the growth of the boys. We are happy with their performance.

We got 1 point [from this match], and there is no other explanation. Nothing can be said about the expectations in the group. There is a need to forget this game and focus on the next one," said Caparros.

In their next two group matches in the European qualifiers for the 2022 World Cup, Armenia will face Germany (Sunday) and Liechtenstein (September 8).