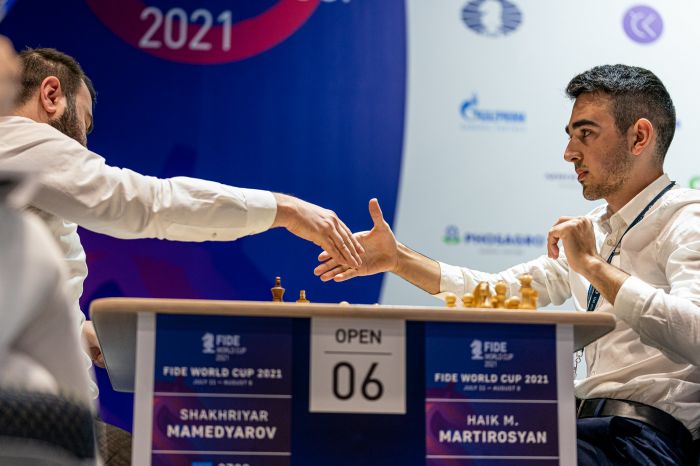 During the final of the play-offs for Chess World Cup taking place in Sochi, Armenia’s representative Haik M. Martirosyan, 21, left leading player of the Azerbaijan national chess team, 36-year-old Shakhriyar Mamedyarov (ranked 6th in the world) out of the Chess World Cup.

In the tie-break, the Armenian grandmaster defeated Mamedyarov 1.5-0.5 in two rapid chess games. In the first game, Martirosyan defeated his opponent with black figures in the 91st step, and he managed to end the game with a tie in the 59th step with white figures.

On July 19, the Armenian grandmaster was defeated in the 86th step with black figures in the second classic game.

Martirosyan scored a victory over Mamedyarov with white figures in the first classic game.

Martirosyan, who became the world U-16 champion in 2016, is the last representative of Armenia at the play-offs for Chess World Cup.

In Round of 32, his opponent will be Croatian chess player Ante Brkic.

In the first round, Martirosyan defeated Zambian chess player Chitumbo Mwali, and in the second round — Turkish chess player Mustafa Yilmaz.

Another upset in the making - Haik Martirosyan (2632) won the first rapid game against Shakhriyar Mamedyarov (2782) and is about to seal the deal in the second game.https://t.co/2x8IO39Olg pic.twitter.com/ez8l6e4WOg

And it's official - Shakhriyar Mamedyarov is out of the World Cup, eliminated by Haik Martirosyan. #FIDEWorldCup pic.twitter.com/xF0A2qmuxI