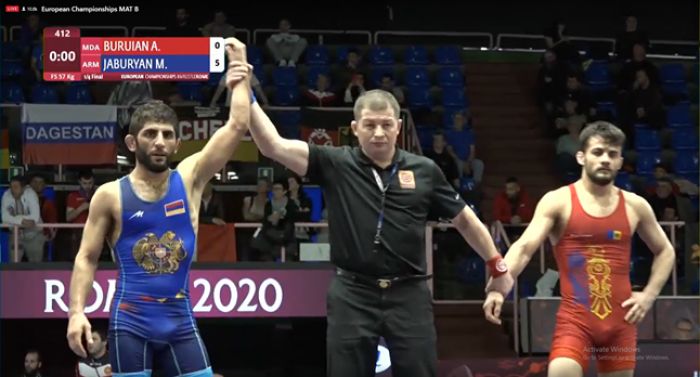 During the evening round, Jaburyan will compete to score a pass to the final during which he will face off with Turkish wrestler Suleyman Atli.

During the first round, the Armenian wrestler was passive and was mainly defending himself, without tricks. During the second round, after losing 0-5, Avagyan became active and made a 2-point roll at the last seconds. As he was making the second roll, the Azerbaijani wrestler grabbed Avagyan’s leg and didn’t let him make the second roll. Aram Avagyan’s witness, the wrestling team’s head coach Habetnak Kurghinyan appealed. The referees satisfied the appeal and added two more points to the Armenian wrestler’s score.

At the end of the match, the Armenian wrestler managed to bring his opponent out of the zone, but he found himself under the opponent. Arman Avagyan asked Kurghinyan to appeal the last trick as well, but the referees didn’t satisfy the appeal.

Avagyan started from the 1/8 final during which he beat Moldova’s representative Georgy Paskalov 7-5.

Out of the five wrestlers of the Armenian team who came out to the mat on the first day, Jaburyan was the only one who continued.