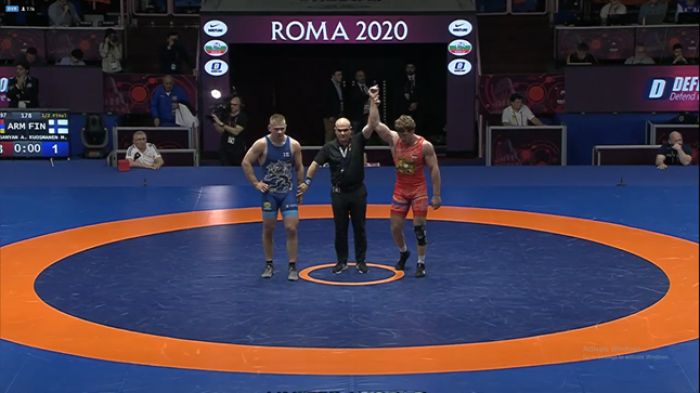 Olympic champion Artur Aleksanyan scored a pass to the final of the European Wrestling Championships (Greco-Roman wrestling) in Rome with a beautiful victory and will be fighting for the gold medal.

On February 12, the Olympic champion will try to score the 5th European gold medal in his career. During the final, Artur Aleksanyan’s opponent will be Italy’s representative Nikolos Kakhelashvili.

The Olympic champion began in the 1/8 final during which he beat Turkish wrestler Cenk Ildem 7-1, and in the quarter final, he beat Bulgarian wrestler Kiril Milov 9-0.

Armenia’s representative in the 60 kg category Gevorg Gharibyan has also made it to the final of the European Wrestling Championships. During the semi-final, he beat Estonian wrestler Hillary Maygisalu 8-0 before the match had ended and will be competing for the gold medal with Turkish wrestler Kerem Kamal.

The finals of the first day of the competitions will take place on February 11. Vice-champion of the European Games, European bronze medalist Karapet Chalyan will compete for the bronze medal in the 77 kg category. On February 10, the Armenian wrestler was defeated by Azerbaijani wrestler Sanan Suleymanov 0-3 during the semi-final. In the fight for the bronze medal, Chalyan will compete with two-time Olympic champion Armen Nazaryan’s student, Bulgaria’s representative Hayk Mnatsakanyan.