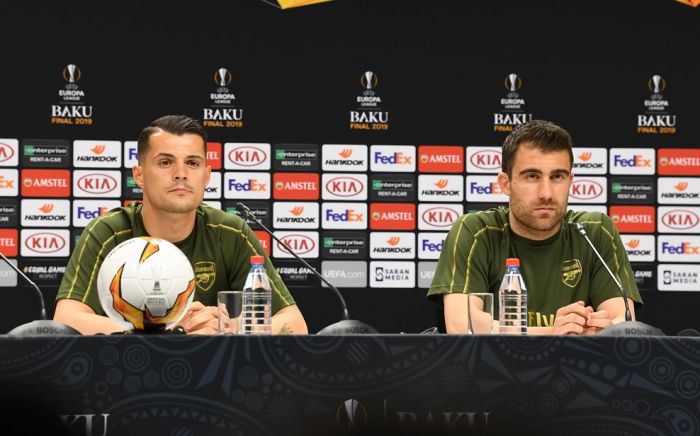 At Tuesday’s pre-match press conference ahead of their UEFA Europa League final against Chelsea, Arsenal’s Greek defender Sokratis Papastathopoulos and Swiss midfielder Granit Xhaka reflected also on their teammate, Armenian international Henrikh Mkhitaryan, who has not traveled to Azerbaijan’s capital city of Baku along with the rest of the Gunners’ squad for this match.

“We [he and Mkhitaryan] are five or six years together, we are very good friends,” Papastathopoulos said, the Arsenal website reported. “I wrote [on Twitter] what I feel. We have also to play for him and the players who are injured. Tomorrow is... if we win this game it is also for them.”

“Of course we are disappointed he [Mkhitaryan] is not here,” Xhaka said, for his part. “We spoke a lot about Micki [Mkhitaryan] and a lot of political things, but it is time to speak about football. He is very important for us, on the pitch and off the pitch, and we want to give him a trophy tomorrow.”

Arsenal will lock horns with Chelsea in their Europa League final, which is slated for Wednesday at 11pm Armenia time, in Baku.

But due to security concerns, Armenia national football squad captain and Arsenal midfielder Henrikh Mkhitaryan has not joined the Gunners for this match.

And Arsenal criticized UEFA for holding this game in the capital city of Azerbaijan.

Earlier, both UEFA and Azerbaijani authorities had given Arsenal and Mkhitaryan security guarantees. But the London club announced that after discussions with the Armenian midfielder and his family, they have decided not to take the footballer with them to Baku.

In the past, Henrikh Mkhitaryan has missed two away European cup matches with Azerbaijani clubs.